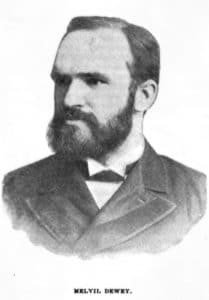 Libraries are probably as old as writing itself. If you are interested in an extensive, well-researched history of libraries, take a look at Matthew Battle’s The Library: An Unquiet History. It is a fascinating romp through the multi-faceted world of libraries from ancient times to the present.

The picture above is of Melvil Dewey, the namesake of the Dewey Decimal Classification System, which was taken in 1856. It was obtained from Wikipedia. Dewey was obsessed with efficiency and took the silent letters out of his own name. 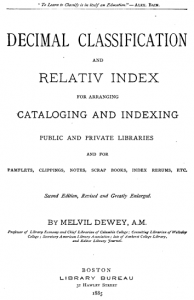 Large libraries had a big problem up until the mid-nineteenth century. Beginning around 1440 as books became more common with the invention of Gutenberg’s printing press, most large libraries were finding it increasingly difficult to locate specific titles due to the number of books they had acquired. Until that time, most libraries arranged books either in the order in which they were added or by the size of the codex (physical book) or manuscript. You can imagine how difficult it would have been to go through thousands of books in a collection to find a specific title if they were arranged by size or acquisition number.

In 1872,  Melvil Dewey, an assistant librarian at Amherst College in Massachusetts, came up with a revolutionary method of arranging books by subject in a flexible system. The classification system that bears his name has since been adopted in many libraries around the world. And while it’s not perfect, it was a vast improvement over what had been used in the past.

Most public libraries and school libraries in the United States still use the Dewey Decimal Classification.

In recent decades, mostly in elementary schools, there has been a movement to arrange books in a more general set of categories (Animals and Outer Space, for instance) so that younger users can grasp the concept of book arrangement but not become confused by the sometimes intricate decimal system. In addition, some high school and even public libraries have moved to arrangements that mimic book stores.

In my thinking, after elementary school, this is a mistake for two reasons.

First, the Dewey Decimal System has performed so well because the decimal system allows for books to be arranged by a great deal of subject specificity. This ultimately makes it quicker to locate books you want to read. While it may not be a huge concern in a library of only a few thousand books, for much larger collections, those specific categories can make locating a book much easier.

Second,  users who are familiar with the DDC can walk into any library that uses it anywhere and easily find their way around the collection. Anything that speeds access to the book sought is worth the time and effort to learn and use. It helps patrons (the term libraries traditionally call their customers), so it helps libraries. So for adults, it serves as a system that does not need to be figured out every time you go to a new library.

While I’m sympathetic to the efforts to simplify book arrangement for the youngest users in elementary schools, I feel it is a mistake to completely do away with a classification method that has served us so well for over 150 years. Modify it when needed, yes, but surely a complete revision on an institution-by-institution basis risks making libraries as a whole much more difficult rather than easier to use.

To find the ten major categories of the DDC, see my previous blog post.

For more information on the DDC, check out the OCLC help page or The Dewey Program at the Library of Congress.