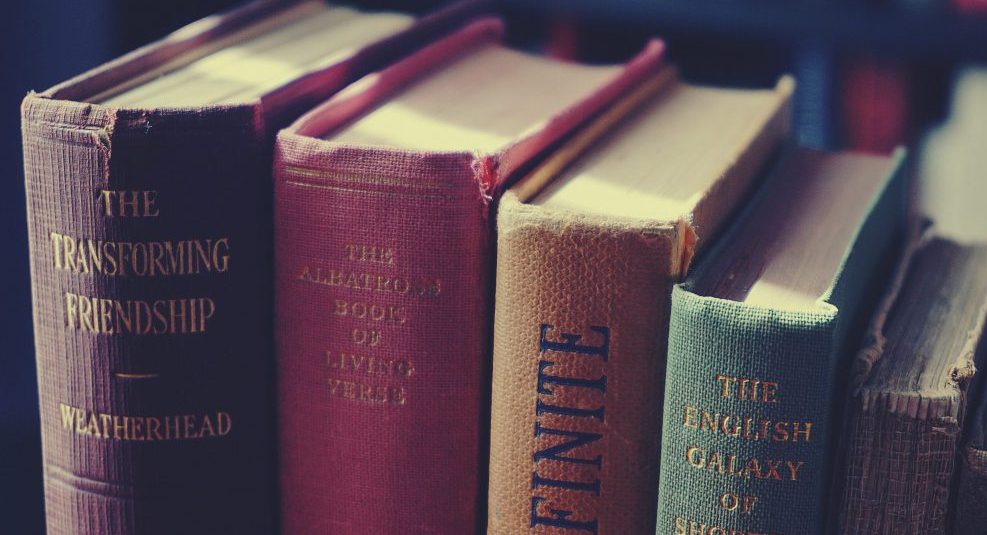 In an earlier post, I covered using the Dewey Decimal Classification system for organizing your nonfiction books. If you have a lot of nonfiction books in your collection, reading that post is the first step. If more than thirty of your books belong in literature, read on. This post will give you guidance on how a library would shelve the literature books in your collection.

The literature section in the DDC may irritate some readers. Modern readers might be surprised that the majority of the classification numbers are devoted to the literature of Europe and North America. In 1876 when Melvil Dewey created the system, American and European scholars had Eurocentric views of the world. This is why they are given so much space.

If you are annoyed by this section of the system and would like to come up with your own method of classification, please feel free to. Your home collection is yours to do with as you’d like.

This section is sometimes called belles-lettres and it includes rhetoric and literary criticism. Rhetoric discusses the various factors involved in writing effectively. Criticism is not a negative evaluation of the writing. Instead, it is a discussion of the themes, elements, symbolism, and techniques in a writer’s work, or in a particular piece of writing. Criticism can be an art form of its own.

Each of the ten categories below potentially contains works of criticism, rhetoric, poetry, essays, speeches, letters, humor and satire, and miscellaneous writings (outlined in 810 below).

Dictionaries, encyclopedias, and concordances of literature go here. And so do serials, like “best of” type books that are published annually. An example would be The Best Sports Writing of 2019. Books on how to write are also found in this discipline.

Recommended Books in the general literature and rhetoric section:

Works that were written in English and published in North America, Central America, South America, Hawaii, and other geographically associated islands like the Caribbean islands are shelved in the 810s. Note that American authors whose primary language is Spanish, Portuguese, Native, or any other, would not belong in this section, but would classified with the language of origin.

Recommended in American literature in English:

Back to the collected works or biographies of authors mentioned in 800 above. If you have a book that was written in English about or by writers from Canada, The United States, any part of the British isles, and/or Australia, they would be shelved here in the 820s. This is because this section is for English from all over the world unless everything in it was written in America (in which case it belongs in the 810s. This can be confusing, so I hope it makes sense.

So this section includes literature from England and all of Great Britain, New Zealand, Australia, India, South Africa, and any other part of the world outside the Americas, where people write and publish in English.

All the literature that was written in German, Alsatian, Franconian, Pennsylvania Dutch, and the Swiss-German dialects are shelved here. In addition, Yiddish, Frisian, Low German (Plattdeutsch), North Germanic (Nordic), East Scandinavian, Old Norse (Old Icelandic), Icelandic, Faroese, and East Germanic literature are here. In addition, it contains Netherlandish, Afrikaans, Dutch, Flemish, Swedish, Danish, and Norwegian literature and all the variations of dialects of each.

Recommended books in German literature and literature of related languages:

This section would be for French literature and literatures in Occitan, Catalan, Franco-Provençal and the Auvergnat, Gascon, Languedocien, Limousin, and Provencal dialects.

Note that comprehensive works on Romance languages are shelved in this section. So if you had a collection of criticisms of French, Italian, and Spanish novels, they would be shelved here.

Recommended books from the literature of French and related languages:

The heading above lists every type of literature included in the 850s. But if a book had French and Italian poetry, it would be shelved in the 840s.

In addition to the languages in the heading above, Judeo-Spanish (Ladino) and Gallegan literature also go here. Most literature published in South and Central American countries would be shelved here as well.

Besides Latin, both the Sabellian languages and Osco-Umbrian language literature would be shelved here.

Note that works combining information about classic Latin and Greek should be shelved in the 880s.

Because the 870s and this subsection are both for ancient languages, the literature categories are a bit different from all the others. They both include Classical poetry, dramatic poetry and drama, epic poetry and fiction, lyric poetry, speeches, letters, humor and satire, and miscellaneous writings.

Every language, living and dead, in the rest of the world is included in this section. Please see the 490s in my blog post on language books to see the order in which they would be shelved.

Recommended books from other literature:

Once you have further subdivided your literature books, be sure to update any spreadsheets or card catalogs you may have made for them.

Do you have a favorite type of literature? Leave a comment below!