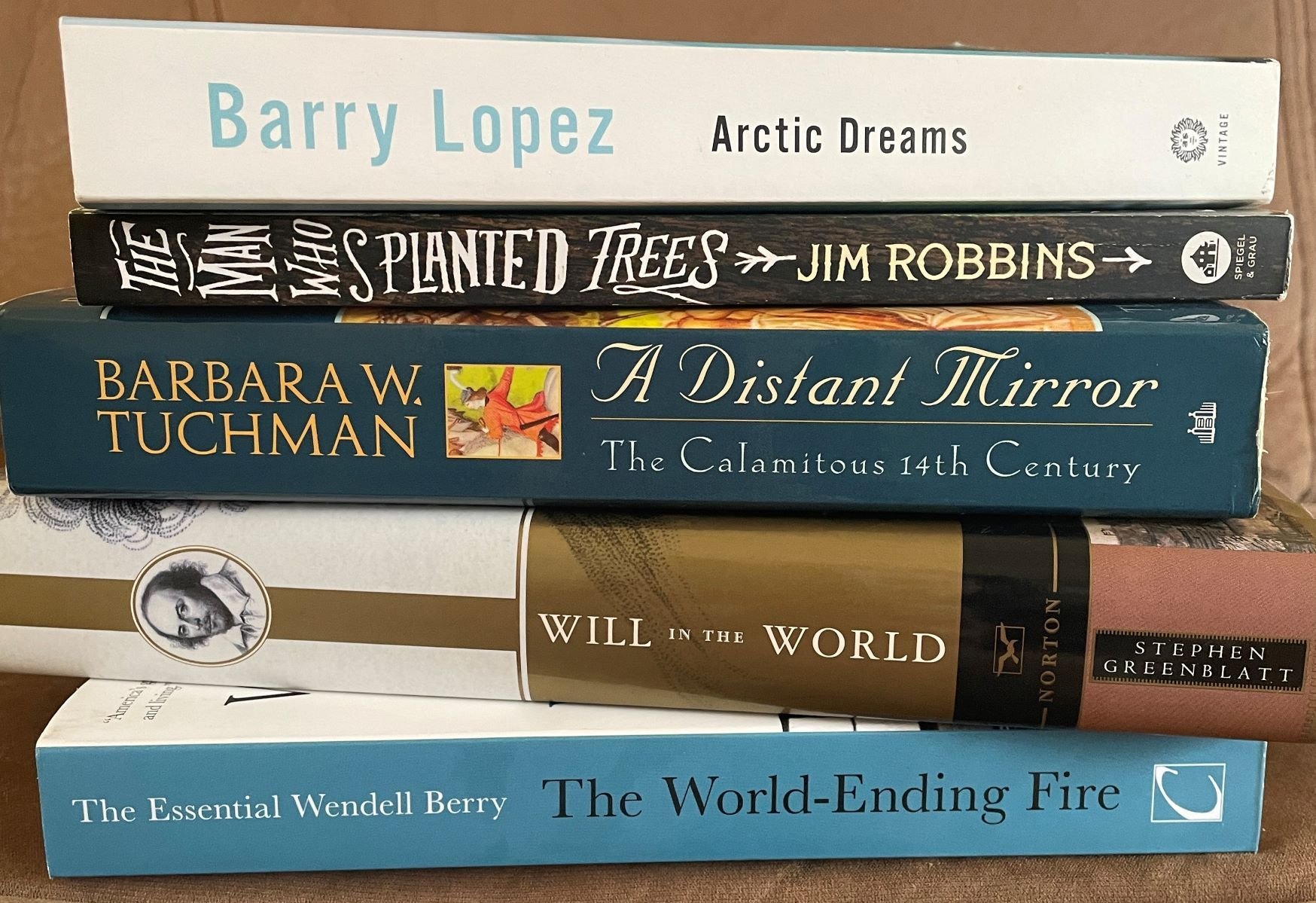 Nonfiction Reading: A Year in Review

While I regret not reading more, like many people, I don’t have as much time to read as I would like.

Time is precious, and I’m picky about what I read. Last year, I only read 30 books. Of these, five were fiction, and twenty-five were nonfiction.

If these, it was hard to choose only five, but each of the books I picked meets my criteria for a good nonfiction book:

I’ve listed them in the order I read them, starting in January 2021. Four of these books are in Library Lin’s Curated Collection of Superlative Nonfiction, which will be published in spring 2022.

I began with Arctic Dreams in January.  It was the perfect choice for winter. I would never have expected to be fascinated by musk-oxen or polar bears. But, instead, the title was perfect. Lopez painted verbal Arctic landscapes like other-worldly dreams. Though I’ve never traveled to the region, I desperately care about its fate because Lopez made me see it in my mind’s eye and understand its preciousness.

The Man Who Planted Trees by Jim Robbins

Robbins showed me the plight of trees. Thanks to this book, I understand how amazing they are and appreciate their current endangerment. David Milarch, referenced in the title, was as interesting as the trees he saves. In a near-death experience, he learned that the world’s trees are in peril. His task is to save the champion trees that are still alive. I read this book in preparation for Earth Day. I wish everyone in the world could own a copy.

A Distant Mirror by Barbara Tuchman

My late summer into early fall read this year was this history of fourteenth-century France. The book was a long, densely-packed tour through a time quite different, yet amazingly similar, to our own. When I finished it, I was astounded at how little humans have progressed morally in the 600 intervening years. Government, politics, and war, while different on the surface, underneath are motivated by the same factors. It was engaging and terrifying.

Will in the World by Stephen Greenblatt

I’m no Shakespearean scholar. I’ve watched some of his plays on stage (including seeing Kenneth Branaugh play Henry V in Stratford on Avon), I’ve read some of them and studied several in college. I appreciate the greatness of the plays, but I must confess, the sonnets elude me. I’ve watched the occasional documentary on the plays and followed with a bit of interest the debate about whether or not William Shakespeare of Stratford wrote them. Based on the scant evidence of Shakespeare’s life and the much greater historical evidence of the period, Stephen Greenblatt makes a case that he could have easily written them. It was also a fascinating look at Elizabethan England, at a time when English society was transforming from medieval to modern.

Unbeknownst to me, I saved my favorite book of the year for last. I’ve heard of Wendell Berry for years. But I’ve never actually read any of his essays, poems, or fiction. The best of his compositions over forty years in this book provide an overview of Berry’s thoughts. While I expected beautiful prose, I got so much more. I discovered in Berry a kindred spiritual spirit. He’s a wise man who understands the value of work and the necessity to care for others and the planet. I regret I waited so late to become acquainted with him. I would have been a better parent, and a better person had read him earlier.

Have you made plans for your reading in the coming year?

← Prev: Books on Christian Experience and Practice Next: Looking Ahead: Reading in 2022 →

Founding Brothers: The Revolutionary Generation by Joseph J. Ellis My rating: 4 of 5 stars Before reading this book,...

From Scratch by David Moscow, a Book Review

From Scratch: Adventures in Harvesting, Hunting, Fishing, and Foraging on a Fragile Planet by David Moscow My rating:...

Indian Givers: How the Indians of the Americas Transformed the World by Jack Weatherford My rating: 5 of 5 stars What...